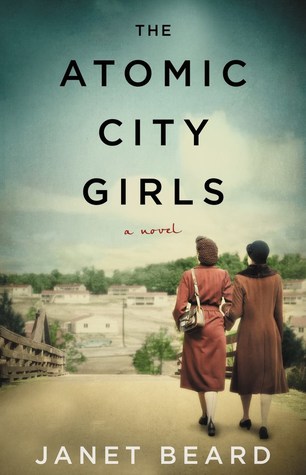 Synopsis: In the bestselling tradition of Hidden Figures and The Wives of Los Alamos, comes a riveting novel of the everyday women who worked on the Manhattan Project during World War II

In November 1944, eighteen-year-old June Walker boards an unmarked bus, destined for a city that doesn’t officially exist. Oak Ridge, Tennessee has sprung up in a matter of months—a town of trailers and segregated houses, 24-hour cafeterias, and constant security checks. There, June joins hundreds of other young girls operating massive machines whose purpose is never explained. They know they are helping to win the war, but must ask no questions and reveal nothing to outsiders.

The girls spend their evenings socializing and flirting with soldiers, scientists, and workmen at dances and movies, bowling alleys and canteens. June longs to know more about their top-secret assignment and begins an affair with Sam Cantor, the young Jewish physicist from New York who oversees the lab where she works and understands the end goal only too well, while her beautiful roommate Cici is on her own mission: to find a wealthy husband and escape her sharecropper roots. Across town, African-American construction worker Joe Brewer knows nothing of the government’s plans, only that his new job pays enough to make it worth leaving his family behind, at least for now. But a breach in security will intertwine his fate with June’s search for answers.

When the bombing of Hiroshima brings the truth about Oak Ridge into devastating focus, June must confront her ideals about loyalty, patriotism, and war itself.

My Discovery of the Book

I finished reading The Atomic City Girls by Janet Beard quite awhile ago so give me a break if I don’t recall every little detail. But these are what I learnt of the story after finishing the ebook:

Eager to escape the country life, June Walker goes to get a job at a top secret government community in Oak Ridge, Tennessee, during World War II. She has no clue to what she is supposed to do except to sit at a machine for 12 hours, operating some dials.

Many people are roped in to work at the community in Oak Ridge to ensure the facilities run like clockwork. Cafeterias, movie theaters and recreation halls stay open all day and night to keep workers entertained and help pass the time.

Due to the strict security rules, though, all that is going on in Oak Ridge is expected to stay in Oak Ridge. Employees are prohibited to speak to anyone not within their allocated areas or outside the community about their daily tasks.

Love Can Make You Break The Rules

Dr Sam Cantor is a Jewish physicist from New York who also works at the community and is one of the few who knows exactly what is going on in Oak Ridge. It isn’t long before Sam and June begin a long-term romance.

After a night of dancing and drinking, Sam accidentally lets slip to June that the entire community has been recruited to help win the war against Japan by building an atomic bomb. Love is blind. Love can make you do things you never thought you would.

June is fascinated and wants to learn more about the task at hand. She’s impressed that they have the potential to win the war. But Sam’s job could be at stake if anyone found out, and after explaining what an atomic bomb is capable of doing, her attitude changes.

My Thoughts on the Book

While all these could be what you need to know about the book before you read it, to quote Gretchen Lida in her own review of the book on the Washington Independent Review of Books:

This wartime tale is more of a snooze than a page-turner.

To say that the novel was disappointing is an understatement. I had high hopes after reading The Last Innocent Hour, thinking that it was going to be another one of those war novels that is captivating, entertaining and educational. Sadly, it was neither of those things and it only compounded my yearning for what could have been instead of what it had been.

The novel kicked off at a snail’s pace, with the author describing her family’s life outside the top secret government community. And when June Walker finally moves into the community to start her work at the mysterious machine for the so-called Manhattan Project, all I read were the bits about the dials and meters that she was supposed to manage without getting bored, distracted or falling asleep. Well, who wouldn’t if you’re meant to sit there and do that one thing for 12 hours straight?

And then there’s a lot to do with what happens when the girls aren’t working. There is a fair amount of flirting, dancing, shopping, going to the movies, more dancing and even more flirting (where Cici, the money-grubbing, husband-hunter, is concerned), and literally living the high life. The whole country is living on rations and here the girls are, enjoying what luxuries they’re entitled to in the community.

Personally, I felt the novel could have expanded a little more on the morality issues that comes with the creation of the first nuclear weapon known to man, as well as the great lengths that the government was willing to go to keep it a secret while keeping the employees happy so they would stay on and finish the job.

On one side of the coin, you have those who think highly of the weapon; despite knowing the consequences, yet they feel it is the best way to end the war.

On the other side of the coin, you have those who are so appalled and disturbed by the project that they will struggle to live with the guilt.

Yet neither side of the coin had been explored in the novel. Instead, readers were given a tour on the bittersweet romance between June and Sam, the vapid socialite lifestyle of June’s roommate Cici and her determination to find a husband who’d give her money and the good life she deems herself to deserve, and the dare-to-be-different behaviour of Joe Brewer’s young friend Ralph.