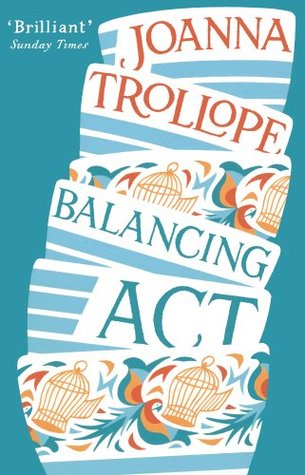 Synopsis: Four strong women. All working in a family business. But what happens when they begin to want different things? And what about the men – and the children – in their lives?

Susie Moran has always been the breadwinner in her family. Her husband was the one who was there for their three girls. But now he wants something of his past back – the life he had before Susie’s career took off, before they had children. And those children don’t see their mother’s business the way she has always seen it, thereby threatening the balance she has worked so hard to achieve.

And then, amidst the simmering tensions, someone significant from the past, someone almost forgotten, turns up. The problems of the past, the present, and the future all become challenges to the stability of both family and work. Which relationships – if any – will survive?

My thoughts on the book:

Balancing Act by Joanna Trollope is a classic tale of women in power, women at work, and women in control (almost!). International Women’s Day could have been celebrated with a book like this!

This book came right after my four months of hell at the hands of my current company. It came right at the end after handing in my resignation letter. During those four hellish months, I had neither the will nor interest to read, write, paint or do any of my favourite hobbies. So when I finally picked up the book to read, it felt really good. I went back to reading and it had been months since I’ve last read a book that I’ve totally forgotten what it felt like to read one.

Of course, one with a keen eye would notice that I went from one epic drama to another. For that was what Joanna Trollope’s novel was all about. Family drama. And it is this type of drama that you cannot escape from, unless you want to disown your parents and siblings.

The novel revolved around four women: Susie Moran and her three adult daughters — oldest, Cara, second, Ashley and youngest, Grace — who run and manage the family pottery business branded as Susie Sullivan. Headstrong Cara and her equally headstrong husband Daniel are involved in the sales part of the family business. Ashley seemed to be the guru in the marketing department while Grace had her head filled with designs for the pottery. However, only Daniel is the only in-law involved in the family business. Ashley’s husband has other plans while Grace has yet to find a man of her own. Susie’s husband Jasper never minded his wife’s major involvement in the business until it began to threaten his existence and the delicate balance he once shared with his wife. Of course, until Jasper decided to get back in touch with his musical roots. Susie thought she had everything under control until one day, life came and yanked the rug right from under her feet. Her estranged father had abandoned her as a baby, leaving her in the care of his parents, had turned up at the family pottery warehouse. The very threads holding the Moran family together began to come apart, leaving each family member exposed.

As I continued reading, I realised that it wasn’t all just about the family matters and the dramas that came with it. It was also about finding out who you really are and what you are capable of, as an individual, as a member of your family, and as a contributor in the family business. It was a tad complicated as well, with all the different characters and their vastly different backgrounds coming together.

Although, at some point in the book, I came across Jeff, the lowlife douchebag who says he is in love with Grace Moran but hardly showed any legit reason to back his claims up. I just wanted to pummel him in the head for being such an annoying asshole! But I won’t deny that there is a lot of truth in the book. When I turned the last page, I had learnt that views differed when it came to life itself, when it came to how one’s life is lived and led, and how different people can really be. I also learnt that we shouldn’t let people step all over us or dictate how we live our lives.