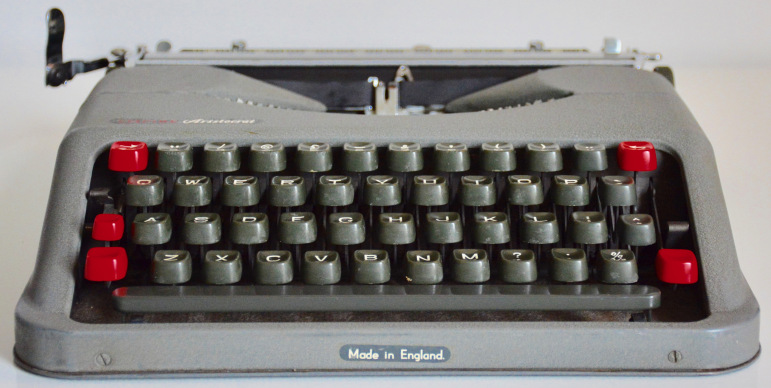 I fell in love with typewriters when I first saw them on Pinterest and Tumblr. I often caught myself envying the people who owned them. But I didn’t know where to get them in Malaysia. Until my husband bought one for my 30th birthday.

It was a vintage model called the Antares 280. I’m not sure where the origins were but I heard it was in Japan? Still, I could be wrong. It was a really obscure model as I couldn’t find any traces of it online. Not in any of the typewriter blogs or websites. The common models were always the Olympia Traveller, Remington, Underwood, Olivetti and Hermes Rocket. However, it was my first typewriter and obscure or not, I was going to love it.

I did love it, actually. I typed the first draft of my second novella with the typewriter. I did some journalling with it and it followed me on a few vacations. But I couldn’t deny the fact that it was big, it was bulky, and it was much heavier than the slightly smaller ones.

And so, a couple of weeks ago, I made the most difficult decision to replace the Antares 280 with a smaller one. No doubt it had been the first machine that my husband bought for my birthday. It was not an easy decision to make as I don’t often replace or give away the things that people get for me on special occasions. I usually keep them until they fall apart or are no longer functioning.

One hot Sunday, I found my next love at Amcorp Mall for RM500 (the original price was RM600 but because I was a regular customer, the seller sold it to me at a hundred ringgit discount). The following day, I listed the Antares 280 typewriter on Carousell, priced at RM350 (negotiable).

A week later, a buyer found me and I booked it for her.

The Antares 280 is still with me, at least until after Chinese New Year. I’d be sending the typewriter back to the seller for a few minor touch-ups before I hawked it off. I often catch myself looking at it from time to time, wondering if I had done the right thing. But when I started playing with the new one and testing it out, I knew that it had to be done.

The Empire Aristocrat is the new model I bought from Solid State Retro, a small business owned by a young Malay chap and his wife. The husband is in charge of refurbishing the old vintage typewriters, touching them up and giving them new or upgraded parts. In other words, he was breathing new life into them. The wife would often post pictures of the typewriters for sale onto their Social Media pages (Facebook, Instagram, Carousell) for the world to see and buy, if it tickles their fancy.

The Aristocrat is a British model made in England. It is exactly like the one shown in the image (above) with 5 red buttons and a gray matte body.

What I love about the Empire Aristocrat typewriter are:

What’s different about it, though, is the ribbon. It is entirely manual, in a sense that once I hit the end, I’ll have to open the hood up and manually rewind it at the click of a latch on the right. Once I’ve done that, I can comfortably continue typing until I reach the end again. So that’s the only downside to the Empire Aristocrat typewriter so far.

Other than that, I’m loving my new typewriter now and it will be following me for my 4th anniversary-cum-Chinese New Year vacation tomorrow! Here’s to more journalling and short stories!