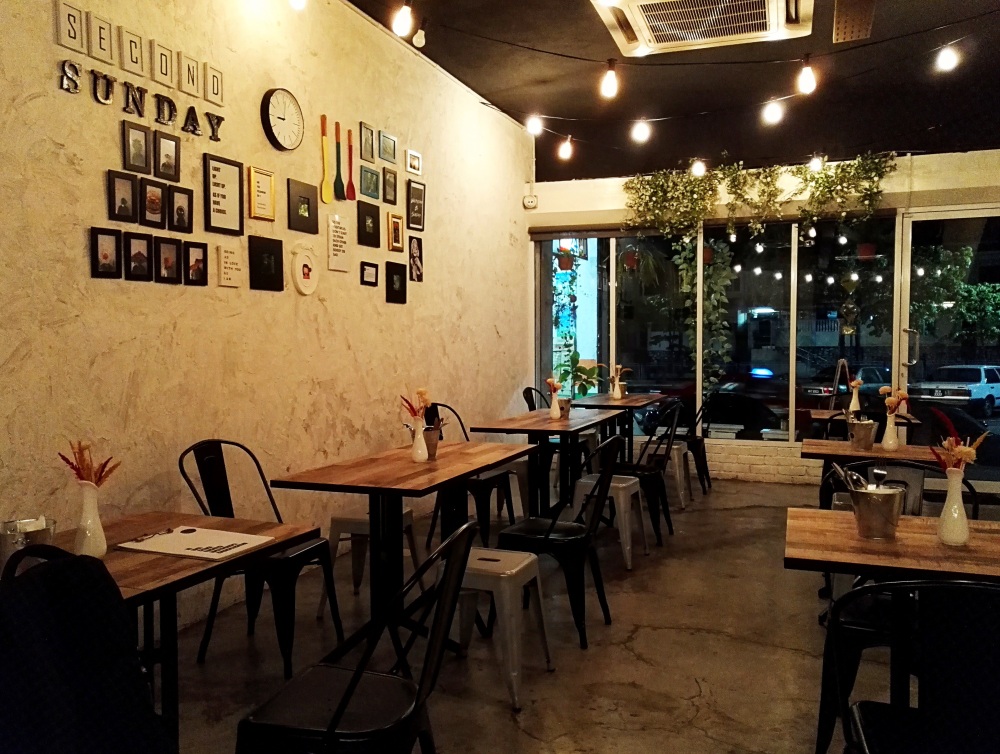 Thus begins our gastronomic journey to yet another cafe. I’m going to blame this on long working hours as I only left the office last night at 8:30pm. By the time we got out of traffic, most decent restaurants have delivered their last orders and were not going to stay open for long.

So we had no choice but to head to one of those independent cafes whose kitchens stay open until 10:00pm. Most cafes do, unless you’re talking about Sudo Brew whose kitchen stays open all day and all night long.

Last night’s culinary quest brought us to Second Sunday, a cafe located along the row of shophouses in Damansara Jaya that act as the perimeter surrounding the Atria Shopping Mall. It wasn’t very hard to find, but at night, things might look a little different. The passenger should be able to look out for the place, not so much the driver who has to keep an eye out for available parking spaces.

At 9:00pm, the cafe looked deserted. In fact, it looked like every other place that was about to close after sending everyone home. But this was how I liked having my meals. In peace. Minus the children screaming. Minus the adults laughing. We were just in time to have the last order of a set meal (a pasta of your choice + a glass of iced peach tea). We made our orders at the cashier, took our seats, and waited.

The cafe had very simple interior decor. Several wooden tables and metal chairs dotted the place. Some of the cement walls were bare and devoid of any wall decor, like framed pictures or witty posters. The menus were found hanging on a rack as you enter the cafe, and the sole instruction was that you grabbed a menu and headed over to the counter to make your order.

Our food arrived and boy, were we either so hungry or the food just looked really good. My husband ordered the spaghetti aglio chicken (above), while I had the chow mien chicken spaghetti (below). I kind of stirred mine up already to mix the ingredients, sauce, and pasta in… So it looked like this when I finally took a photo of it.

The aglio chicken had a good mix between sweet and spicy; I believe because of the cherry tomatoes they threw into the mix, they might have been the source of sweetness. I didn’t have the chance to try the aglio chicken properly because he was so hungry that he had polished off the last morsel before realising that he was unable to let me have a bite of his dish.

The chow mien came as a huge surprise for me because it was really well done! I thought that this was something that my mum could have made at a lower cost, but I must admit, the dish blew my tastebuds all over the place. The stir-fry sauce was sweet and flavourful. The spaghetti was cooked just right (al dente is my favourite noodle texture!). The chicken chunks were all the right bite-size pieces. I had absolutely no complaints for this dish. It was so good that I literally took my time savouring and enjoying it.

But my biggest mistake came when I decided to go ahead with ordering the local pankek as my dessert. I paid the price of reaching the tipping point when I went ahead with the order and by the time the pancakes arrived, I was wondering if I could really finish them. My husband did the same, but he was able to finish his stack of pancakes. His stack came with four slices of pancakes, a shot glass of maple syrup, strawberries, bananas, and a dollop of butter. It was the simplest pile of pancakes one could ever have. 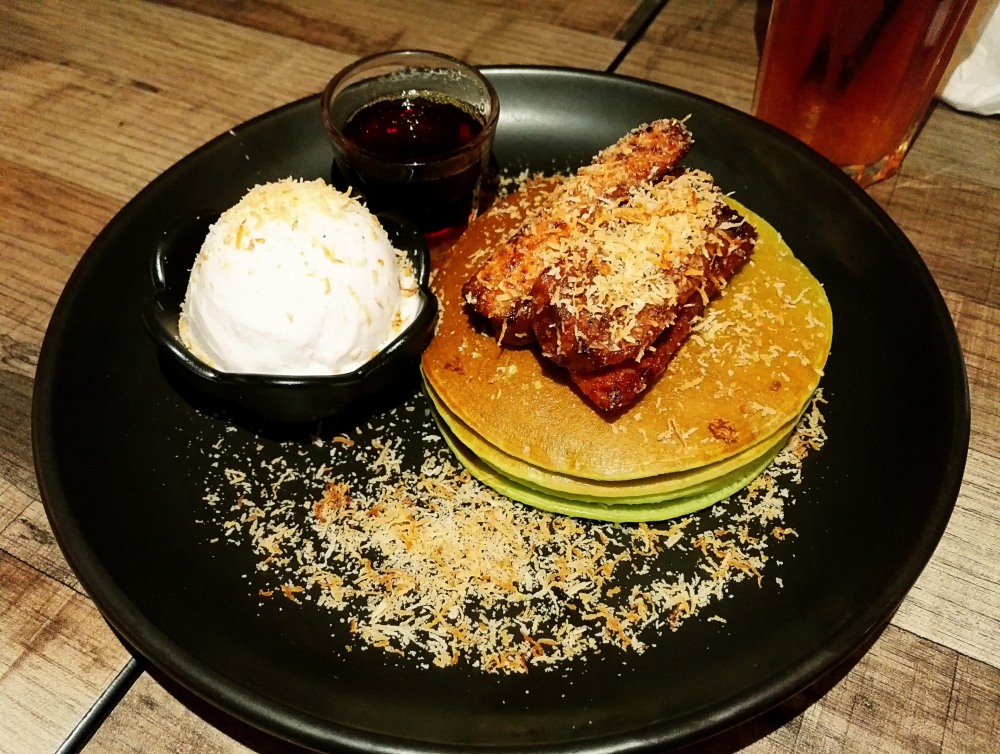 I, on the other hand, went for a little more class and ordered the local pankek, a stack of four pandan-flavoured pancakes, topped with caramelized bananas and toasted desiccated coconut (seems to be a trend for these shredded babies), a side of coconut ice cream, and a shot glass of gula melaka syrup. It was the most heavenly stack I have ever had!

CAUTION: Unless you are naturally a big eater, I wouldn’t recommend having both pancakes and your main course in one go. I couldn’t, and I struggled with it, only to wallop two slices and the bananas. The pasta was so good that it filled me up completely. The idea of desserts just tipped me over the edge. I guess I was being too greedy.

The food was good, nonetheless. Despite the fact that I couldn’t finish my pancakes. The food was still good. Both pastas were great (my husband insists that his was good even if I didn’t have the chance to try his). The pancakes were soft, warm, and fluffy. Worth a try, and if you’re hooked, you can thank me later.

The service was prompt, perhaps because there wasn’t a crowd by the time we arrived. The boys at Second Sunday were friendly, and pretty laidback about the fact that one of them couldn’t really pronounce the term ‘chow mien’. I thought he had said ‘tom yam’! He looked sheepish and apologised for it. He didn’t have to, really.

The atmosphere was perfect. Again, it could have been because it was way past dinner time by the time we got there. So there weren’t anyone who was hellbent on ruining my meal time. A trio of diners came in much later after us, but despite their talkativeness and their voices bouncing off the walls, it didn’t dampen my mood too much.

Give it a try. Worth the effort. And do go after peak hours. You want to eat in peace, not have your eardrums blown into smithereens. Also, the cafe staff will be able to tend to you more properly too!