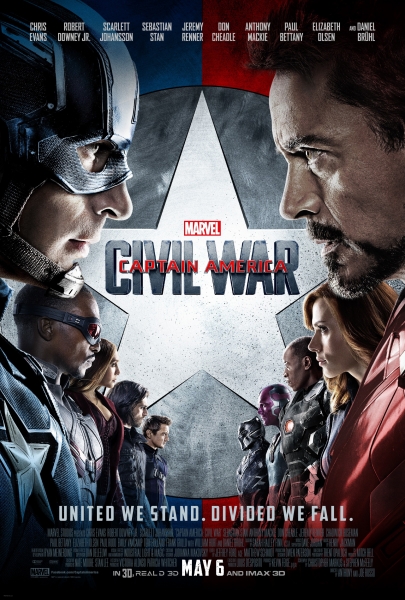 I know the poster says that May 6 is the official release date for the movie, somehow, it is already out here in Malaysia, and I saw it last night. Also, since many of you may not have seen it yet, I won’t be leaving spoilers in my review.

I just want to say how much I love Chris Evans in this Captain America instalment!

No, really, I do. Not just for his biceps and triceps, and rock-hard, drool-worthy muscular physique. But because of his stance in the movie.

After another incident involving the Avengers results in collateral damage, political pressure mounts to install a system of accountability, headed by a governing body to oversee and direct the team. The new status quo fractures the Avengers, resulting in two camps, one led by Steve Rogers and his desire for the Avengers to remain free to defend humanity without government interference, and the other following Tony Stark’s surprising decision to support government oversight and accountability.

P/s: I would have thought it was the other way round. That Captain America would side the government and Ironman would go against every rule in the book.

Yes, that is as far as I would go. Leaving the summary of the movie from IMDB here. But what exactly was the movie all about, well, you’ll just have to watch it to find out. Unless we’ve got some here who think that Hollywood superheroes are overrated. Take that up with Stan Lee, not me.

Anyway, back to my gushing and salivating of the Stars-and-Stripes super soldier. I have to hand it to Hollywood though. Making so many instalments and ensuring that they are still captivating and exciting enough to lure moviegoers back to the big screens must be one hell of a chore! There have been many sequels and prequels lately. Sometimes they go forward to expand the plot. Other times, they backtrack to tell you how it all began (think Star Wars, and recently, the Huntsman movie starring Chris Hemsworth did that too).

Reprising their roles in Captain America: Civil War were:

Other superheroes brought in by Marvel included:

But for the trio that were brought in specifically for this one, I found them a little comical. Well, maybe not so much for the Black Panther, but I didn’t find Paul Rudd as Ant-Man and Tom Holland as Spiderman being serious enough for their roles as superheroes.

Tom Holland was a little too talkative as Spiderman. I thought he was the strong, silent type as portrayed by Toby Maguire and Andrew Garfield. And I still find it hard to believe that an ant can be a superhero. Sorry, Paul Rudd. Sorry, Marvel fans. Hmmm, maybe I should take this up with Stan Lee myself, too, huh.

Now we come to the awesome part of the movie. It was really cool, having 12 superheroes in one already super-powered movie. However, the not-so-cool-nor-awesome part was having all 12 divided into two factions, 6 superhumans in each faction, and going head-to-head because of some political interference.

When I first got wind of this instalment and learnt of what it was going to be all about, I actually felt a little sad that this was how it was going to be. Why them? Why couldn’t it have been a ruse planted by yet another fallen (but reborn) HYDRA S.H.I.E.L.D.-hater? Why did it have to involve the government and their agendas and politics?

See, children, this is why we should never play with politics. Politics is like fire. It travels fast, and unravels equally fast. Once the flames have been fanned, it will grow and engulf everything, from friendships to lives. Unless you’re not planning on having any friends. Good thing it was just a movie. Then again, politics is real. Politics is very real.

Oh, have I said how much I love Chris Evans, though? I think I did, right? Yeah, I might have. But it doesn’t hurt to say it again, teehee. One epic scene that I must make mention of is the one where Steve Rogers was forced to hold on to a helicopter that his friend Bucky was using in trying to escape. Yes. Spectacular, isn’t it?

Now I shall lie in wait for the next superhero movie: X-Men – Apocalypse. I think there is even an Avengers movie in the making for 2018. Wow. Hollywood is really making a lot of money here!