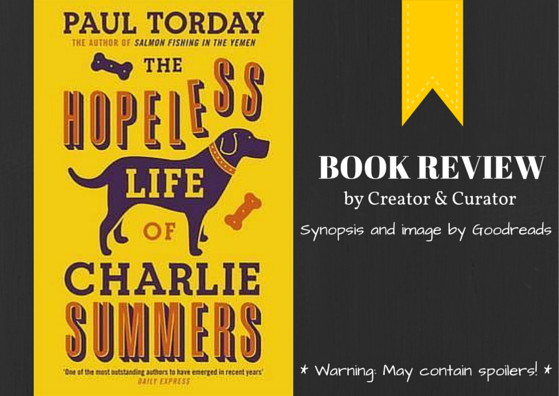 Alright, I’m finally done with this. Took me awhile to finish reading, it did, and now I’m two books behind my 2016 Reading Challenge! I’m supposed to finish reading 50 books before the end of the year too.

Well, without further ado, here is what I think about the book. My usual routine will begin with a synopsis by Goodreads:

Hector Chetwode-Talbot, Eck to his friends, has left the army. From a privileged background, he is at a loss as to what to do next, when he is approached by an old army pal, Bilbo Mountwilliam. Bilbo runs an investment fund company & business is booming. Bilbo persuades Eck to join the company as a ‘greeter’.

There were quite a number of double negatives in the book, though, and this makes it harder and more challenging to read and understand what the author is trying to say. Double negatives like ‘not unaffected’ and ‘not unstained’. Whoa. I actually had to read it a few times before I got what he was trying to say.

‘The Hopeless Life of Charlie Summers’ by Paul Torday is yet another one of those long titles but it beat the earlier book I read (something about grandmothers and apologies). The author was a familiar name as I had watched ‘Salmon Fishing in the Yemen’ last year and the movie was based on the book of the same name.

The story of Hector and his life in the sticky embrace of the financial and investment world was a real eye-opener. Never mind that the plot was a fictional one, but it had no doubt planted a realistic scenario in my head of what shit could happen if there was a financial crisis in a country. Right now, Malaysia is probably facing one too. Prices are going up, up, up but salaries are stagnant and not going up enough to support the population’s changing lifestyles.

The prologue of the book was enough to tell me that what I’m about to read will cover debts and inflation, monetary situations, financial issues and investment scenarios. It was enough to tell me about how money is going in and out but not to and not for anyone in particular. It was enough to remind me of our current situation in Malaysia, of how much money is coming in for a certain someone but without so much of a reason why and who is giving that person the money.

In the real world, as long as you knew how to lie and expand on it, you were considerably more able to take on the world and be ahead of everyone else. Or better yet, step on a few heads while you’re at it to gain a few more favours too. Sadly, that was what Bilbo and his Mountwilliam Partners hedge fund firm did to their investors. They mined the fears of the investors, told them a story and took their money. Where was the money injected to, no one knows. All they thought they knew was that the firm was encouraging people to invest their hard-earned money into bogus funds which only served to strengthen the financial position of the company, but had nothing in return for the investors. And poor Hector Chetwode-Talbot, or Eck, was involved in the whole thing, not so much as the brains behind the schemes but more as the middleman between his friend and boss, Bilbo, and the rest of the future investors. But when the economy soured and things took a turn for the worst, the firm went bust, the money went missing, and the investors lost everything.

But that was Eck. That was his job. He was hired to sugarcoat the situation to future investors and lure them in to what was then defined as the place for the rich to go to get richer. He was, in the eyes of his clients, salesman. But he could well be seen as a conman by his friends. If so, he was no better than Charlie Summers, the man Eck and Henry Newark met in South of France. The man who tried so hard to make a living using short cuts and little tiny webs of lies and deception.

At the end of the day, you realise that both men were anything but conmen. Both men were trying to make a living. Both men were lured in by the luxury of riches. And both men were floored by the very thing that promised them a good life. One lost his life. The other lost everything that he ever had in his life, but was at least given a second chance to start over.

Greed. It was greed. Greed doesn’t make the world go round. Greed stops it right exactly at the point where you least expect it, and then shoots you in the face. And then you wonder if you were involved because you wanted to or taken along for a ride because you had no choice. Either way, it doesn’t end well for you. Poor Henry Newark. He lost two million pounds, a few cottages and the woodlands. Poor Charlie Summers. He lost his life because he reached the end of his tether.